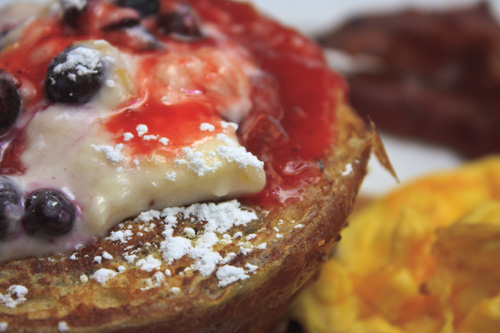 It was super hero weekend around these parts. Avengers dropped, free comic day happened and we threw a super hero themed birthday party for my little guy. I was taking the wife to see the Avengers today and my sister and her beau asked to join in. I insisted that we brunch as a pre-show event. I chose Mimi's because it wasn't far from the Mason Theater. I had been to Mimi's for dinner and the food was decent. I thought I would give them a try for breakfast. 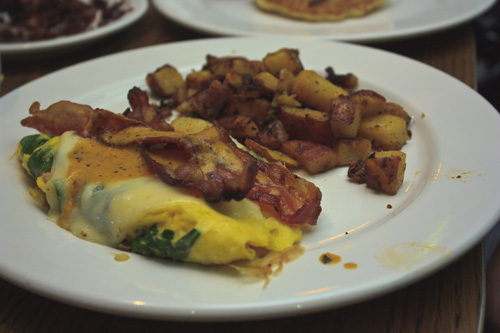 Mimi's is apparently owned by Bob Evans, which you wouldn't know by the ambiance. It appears to be rather upscale, but suffers the fate of many chain restaurants where they put way too many things on the wall. The menu is very bulky with a variety of  dishes. They serve breakfast all day, but you have to specifically ask for a breakfast menu after a certain time. They will usually hand you the lunch or dinner menus after noon. 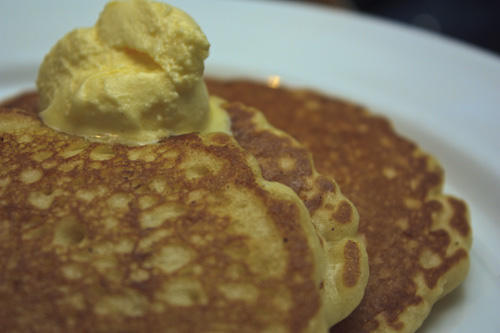 The service was interesting on this trip. Our waitress told us she wasn't our waitress, and that we would have another guy servicing us. Then she proceeded to wait on us for the entirety of our stay. I thought this was an interesting, but unnecessary peek behind the curtain. I would never have known whether she was my server or not. She was a little forgetful, but she was sweet and funny. She apologized profusely for everything, even things that did not seem to be mistakes. She was a more than decent server, but it was peculiar to say the least. 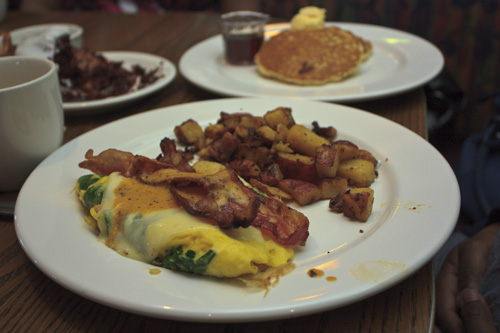 We ordered a lot of food. I decided to try something called the cinnamon blueberry French toast. It was their cinnamon french toast with strawberry sauce, and blueberry creme filling. It was sweet fluffy and delicious. My major complaint with it was that it was too soft. I prefer for French Toast to have a crisp outer edge. This was way soft, and reminded me of the cinnamon french toast that Perkins served. I thought it was a good mix but not quite good enough. The dish came with eggs and bacon which was pretty tasty and well cooked. 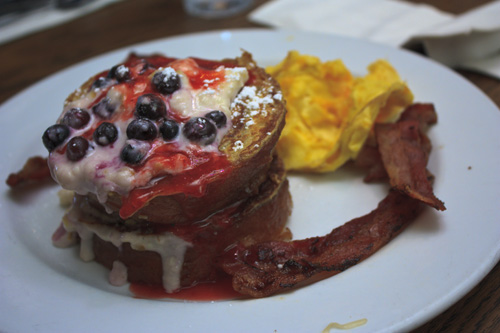 My wife got the La Parisian Omelet which had spinach and mushrooms in it. It was well cooked and delicious. They had pretty good potatoes as well. My wife enjoyed the dish. She also got pancakes with her meal. There was a little bit of an issue with the pancakes. My wife wanted two, but they sell them for $3 a piece, so it was cheaper to buy three for $3.99. She said the pancakes were good. I forgot to try them. 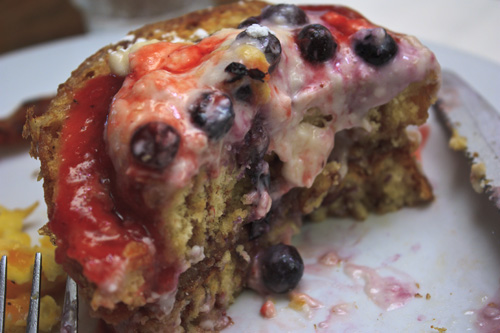 A pleasant surprise was the red velvet muffin that came with my wife's meal. It was more chocolate than red velvet. It was dense and very rich. They poured on a lot of frosting, so much that it was dripping off the muffin's crown. We enjoyed the muffin, although we did not eat more than half of it.

I give the whole experience 3.5 out of 5 broken eggs:

The food was more than decent, but it was shadowed by a cluttered menu and weird service. The muffin was great but the french toast was soft. I have heard some people talk about how much they enjoy this place but it was not that spectacular. I was curious about other things on the menu and I may stop in on another occasion.